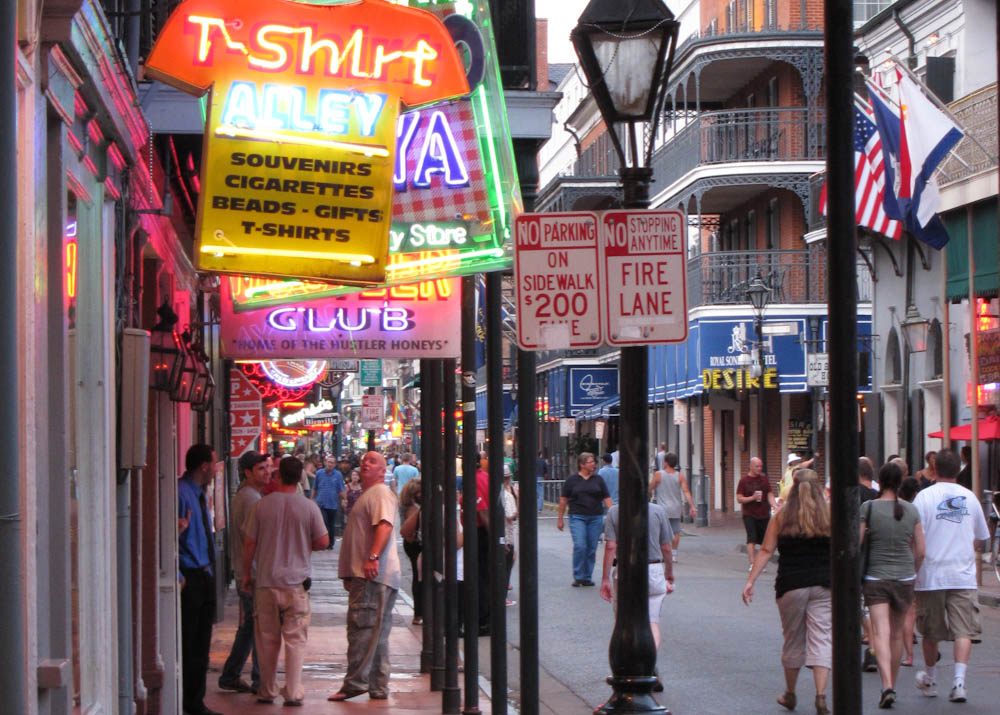 A strange way to start a post about New Orleans, I know, but I have to mention how very cool Facebook can be. While sitting in a Starbucks outside of Lake Charles (western LA), and catching up on work, I hopped onto Facebook to check some status updates. As I was about to pack up and leave, my cousin (once removed) Lisa popped on, and I shot her a quick hello and mentioned that we were in her state, as I remembered that she worked at LSU. Lisa immediately asked us to stop by and spend the night, and after checking with Kathy we took her up on her offer.

We arrived after dark and briefly met Paul, Lisa’s husband, and admired their beautiful home. They quickly had us setup in the guest room and we thankfully crashed after our long days drive. The next day we spent with Lisa as she had the day off, and we felt like we’d found a new family member – which in a way we had! It was great to take the morning off, and catch up on work, laundry, and life while getting to know my cousin.

As Lisa and Paul’s home is located across Lake Pontchartrain from New Orleans, Lisa recommended we take the causeway across the lake into the city. I hadn’t realized that there was a road across the middle of the lake, and was excited to drive the 26 miles into New Orleans.

Lake Pontchartrain is absolutely gigantic! Most lakes, at least the lakes I’m used to, are moderate in size. Even if they’re long in one direction, they tend to be narrow in the other. Lake Pontchartrain is basically round, so when you enter the causeway you feel like you’re driving out into the ocean. I couldn’t even see the other side for the first few miles! I can easily see how this massive lake could fill up and flood the city of New Orleans. It’s really an inland sea more than a lake.

We arrived in New Orleans in the late afternoon, and found our way to the French Quarter after some struggling. New Orleans is filled with one-way streets, so navigation can be a bit tricky. I ended up turning right onto Bourbon street, and we drove through the heart of the French Quarter. It was still early and there wasn’t much activity, however the varied and colorful nature of the city was apparent everywhere. We found parking close to the water, and walked back up to Bourbon street in search of The Red Fish, a wonderful restaurant that Lisa had recommended to us.

Louisiana is famous for cajun food of course, so I had the alligator sausage and shrimp gumbo which was wonderful. We also indulged in the chocolate bread pudding! I’ll let the pictures speak for themselves, but suffice it to say it was VERY tasty.

After our meal we emerged into the gathering dusk and the bright lights of Bourbon street. I’d like to say that I found Bourbon street to be wonderful, but unfortunately the only word I can attach to it is seedy. In fairness this wasn’t during times of festival, and there wasn’t much in the way of music or decoration. The city was quiet as it was a Tuesday night, and there were more street vendors and hawkers than tourists. That being said, the huge prevalence of strip joints, sex shops, prostitutes and bars was a surprise to me. I could see evidence of French architecture, but it was largely covered by rock band posters and TV’s with lewd images. The whole thing reminded me very much of old-town Las Vegas.

We got a few streets over and then the real French quarter emerged. The classic old buildings, the antiques and gas lanterns, and the horse-drawn carriages were much more what I’d pictured the French Quarter to look like.

After walking for an hour in the heat and humidity we noticed that New Orleans has a lack of public restrooms, but fortunately across canal street from the French Quarter there’s a Harrah’s Casino. I’ve always appreciated casinos for their large public restrooms, air conditioning, and gambling opportunities, and we took advantage of each of them, and even left the casino up a whopping $15 – just enough to cover our parking.

All in all I’m glad that I got to see New Orleans, but I think we’d do well to tour the city with someone who knows it better next time. It would also be a good idea to visit in the cooler months, as New Orleans was incredibly hot and humid! Perhaps this winter we’ll enlist my cousin to take us on a tour of the city and we can experience Mardi Gras. I’m sure that will dramatically change my impression of the city for the better.

Until next time, happy travels!

Welcome to Louisiana, Spanish Moss and the Swamp

Welcome to Louisiana, Spanish Moss and the Swamp